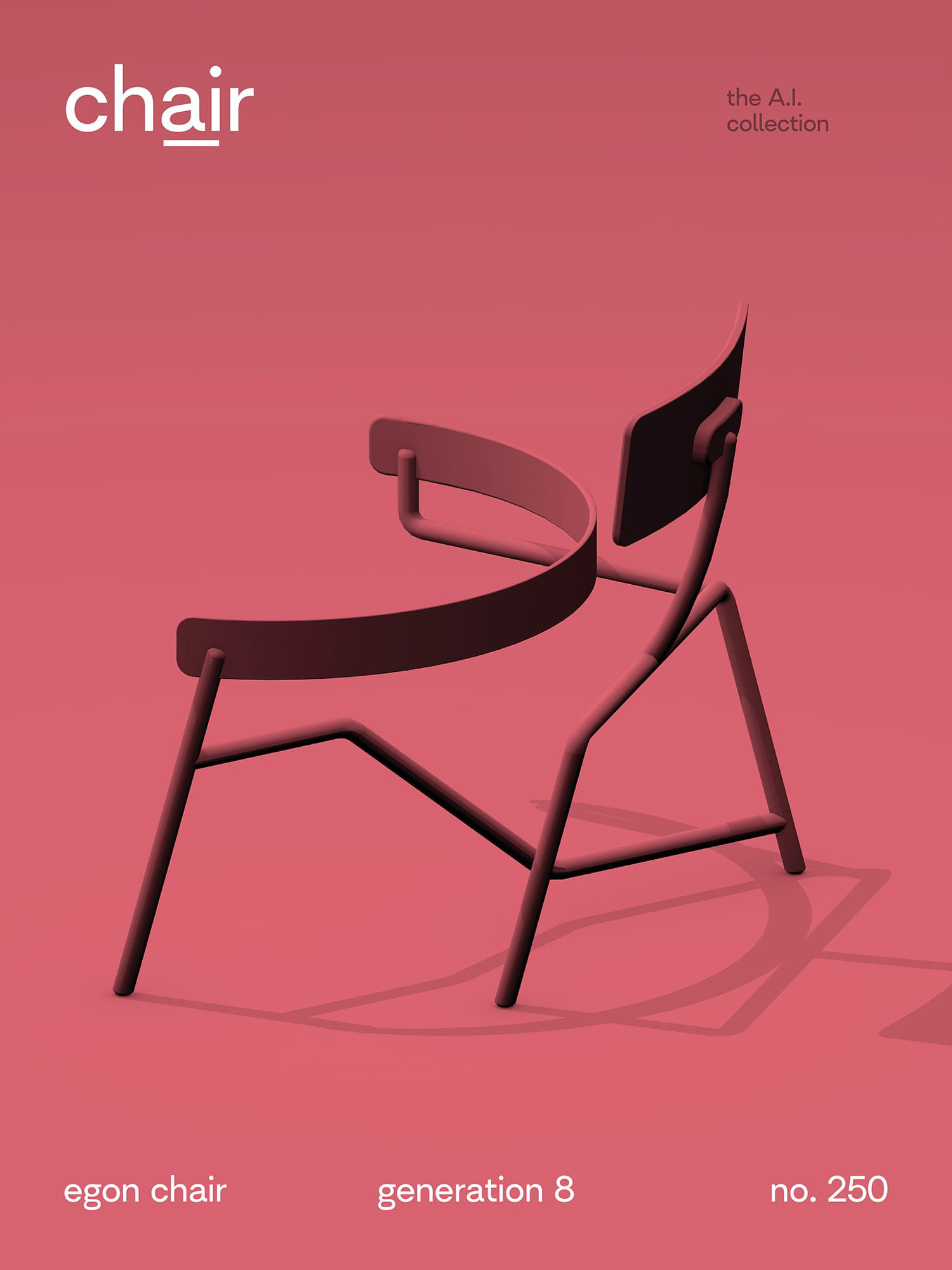 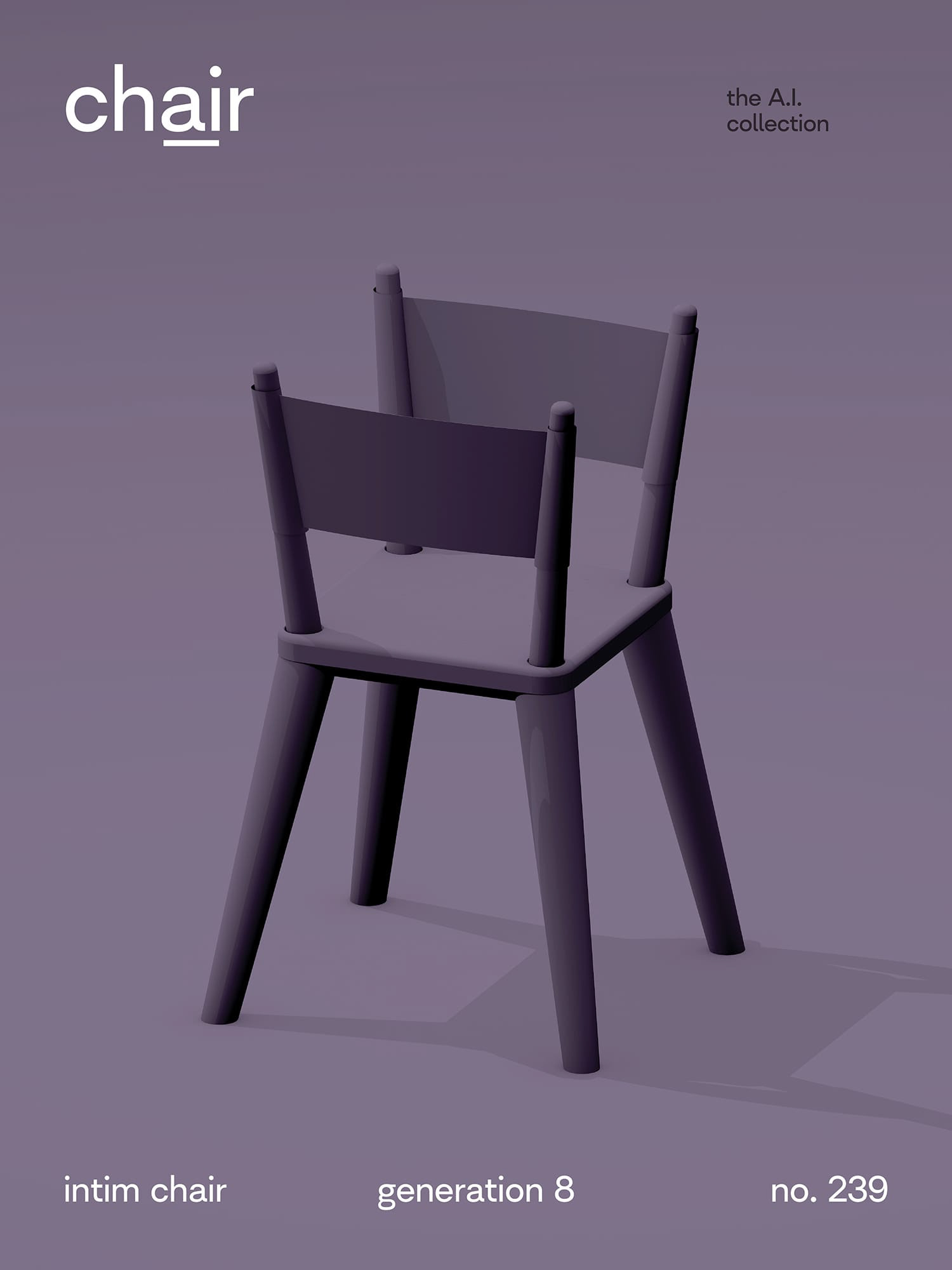 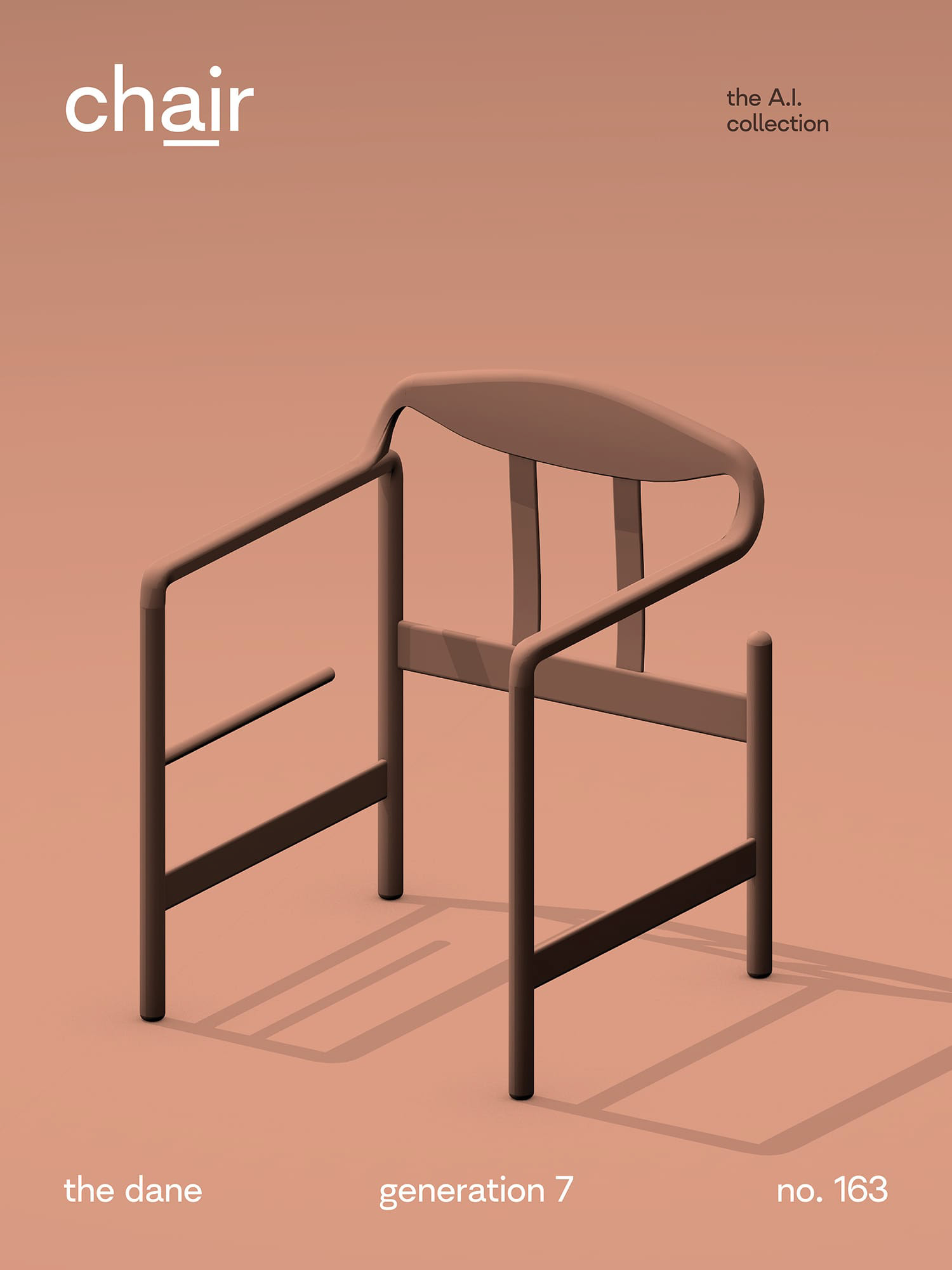 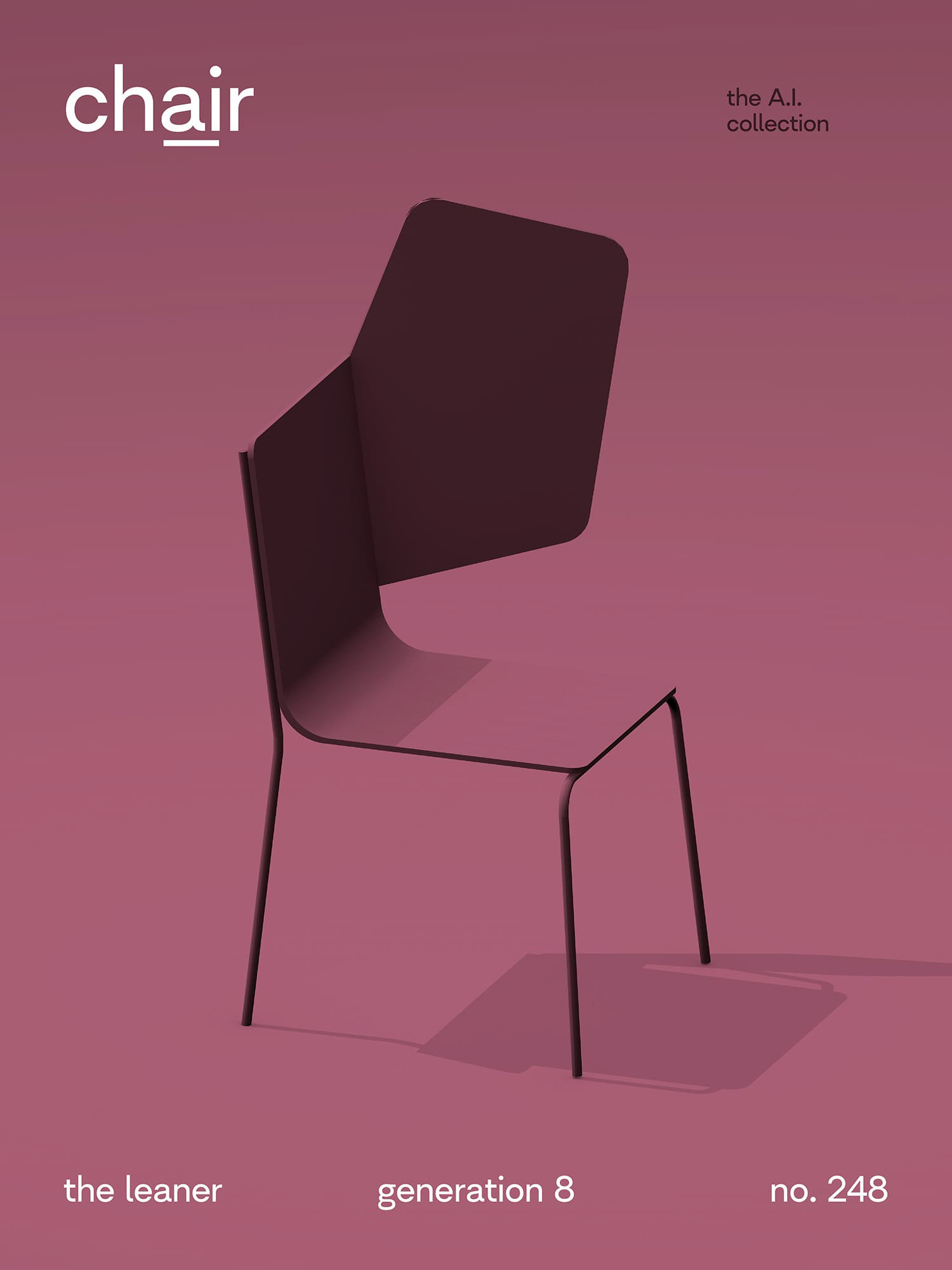 About the project
chAIr is a series of four chairs co-designed by artificial intelligence and human designers. The project explores a collaborative creative process between the two.
We trained a generative neural network (GAN) using a dataset of iconic 20th-century chairs with the goal to `generate a classic`. The resulting model was used to generate new chairs as visual prompts for a human designer who turned these images into feasible chairs through manual sketching and rendering. The human designer was faced with the challenge to understand and transfer these generated images into something that other humans can perceive as a chair.
The project reverses the roles of human and machine in the design process and industrial production. It explores co-creativity between humans and AI, taking the chair — the archetype of a designed object — as an example.
chAIr is a collaboration between Philipp Schmitt, Steffen Weiss, and two neural networks. 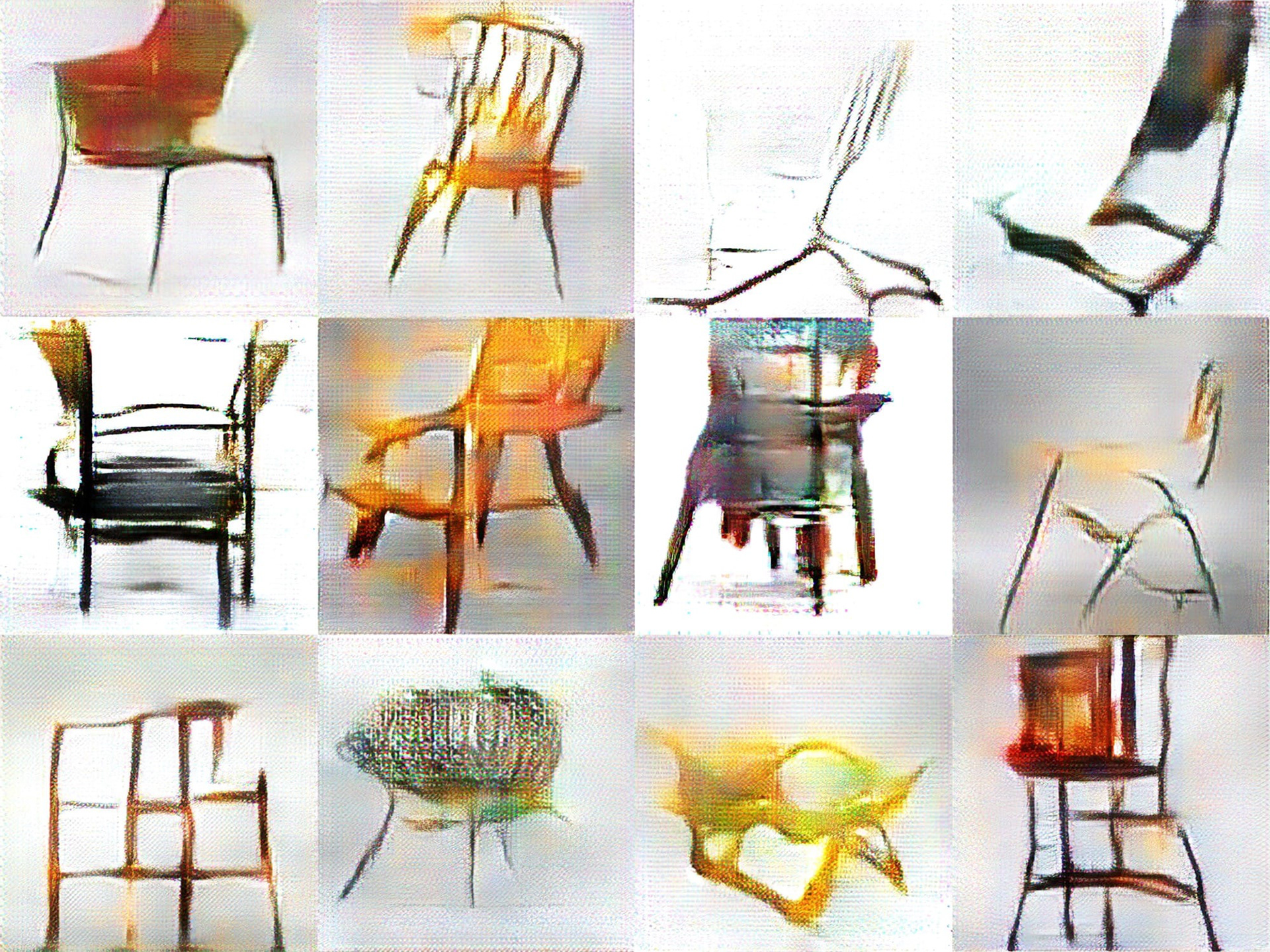 Process
1. Training
Philipp Schmitt trained a neural network to generate images of chairs. The training data set contained 562 20th-century chair designs scraped from Pinterest.
The AI used a visual system and only considered aesthetics. This stands in contrast to
other procedural design approaches like Autodesk’s Project Dreamcatcher that optimizes designs for functional requirements, e.g. maximum stability at lowest weight.
It was not our goal to generate a functional chair, but to generate an engaging ‘visual prompt’ for a human designer. ‘chAIr ’is a case study for Philipp’s Augmented Imagination research project which explores the use of machine learningas an art and design tool for mind bending — like Surrealist frottage; one that caters to the subconscious, the associative, the imaginary rather than the rational.
2. Generating
The neural network generated hundreds of chairs: Some are barely recognizable as furniture and many others aren’t exactly functional, lacking a seat or missing a leg.
There are concrete ones that remind of specific iconic designs and others that seemingly
fit into a style, an era or a manufacturing process.
The neural network tries to create an abstraction of common characteristics in the training data (e.g. the visual features that are common to the images). All images showed chairs, but wildly different ones. What they have in common is being iconic 20th century designs. Can the AI pick up on what made a chair a ‘classic’and then generate new classics?
3. Human
We turned a selection of generated chairs into sketches and, ultimately, concepts for real chairs. First, we sketched manual scribbles, then transferred a selection into CAD to
render 3D models that are easier to perceive for neutral viewers. The idea was to neither simply trace the generated images, nor to transform it into traditional pieces of furniture. Rather, Steffen brought out the chairs he saw in the blurry images to help viewers see
what he imagined.
‘Seeing the chair’ in an image is an imaginative and associative process. It pushes the designer away from usual threads of thinking towards unusual ideas that he might not
have had otherwise. Methods like sketching and 3D modeling introduce limitations and challenges that the AI didn't face (e.g.perspective) and creates opportunities for
imaginative thinking.
4. Prototype
Based on the sketches, we crafted miniature prototypes of four designs. The real
world introduces yet another layer of constraints (e.g.material properties and law’s of physics) and consequently new challenges: How to create this joint? Will it stand?
Which tools do I need? The transformation from generated 2D images to a 3D model
also raised many questions about how previously occluded parts were supposed to look like. The result is four chairs, scale 1:8 in balsawood, brass tube and aluminium mesh.
We also 3D-printed a chair. However we felt the very particular aesthetic of printed models did not suit the project. With AI now at the beginning of the creative process, we wanted to bring the manufacturing back to crafting and making.
Note: We are currently looking for a partner to make real pieces of furniture from our prototypes.

From generated image via sketch to prototype: Egon Chair

From generated image via sketch to prototype: Intim Chair

From generated image via sketch to prototype: The Dane

From generated image via sketch to prototype: The Leaner
Context
Before the 19th century a craftsman-designer, often a trained furniture maker, designed and built a unique chair themselves. With the arrival of the industrial revolution design became separated from the production process. The industrial designer designed a chair using a creative process anda producer took specifications to mass-produce thousands of identical chairs. In the late 20th century computer-aided design (CAD) became an important tool to design machine-supported and optimized for machine production. Today, materials and production methods have further diversified, but the human is still the creative agent whereas the machine is responsible for production. chAIr turns around the product design and production process, using AI not for optimization or mass production, but as the first step to stimulate the imagination.
“Everything is a remix”. Involving the computer into the creative remixing can save time for the designer and, more importantly, inspire new approaches. We don’t really know where inspiration comes from, but strive for moments when things are associated and set in relation that have never been put together before. We can use AI to generate surprising, evocative prompts — something alien a human might never come up with: as augmented imagination.
After decades of automation, creativity seems to be the last bastion of human competence. ChAIr doesn’t suggest the opposite but, like other experiments, that human and AI
co-creativity can possibly extend our imaginative capacities.

making of the chairs
Credits